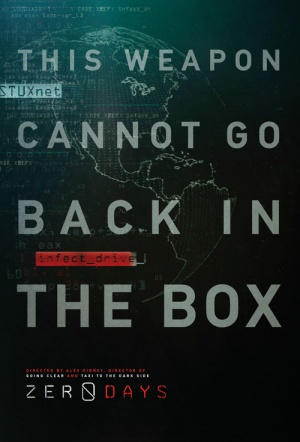 Designed to destroy the centrifuges essential to Iran's nuclear programme by making them tear themselves apart, Stuxnet is a computer worm first identified in 2010. Believed to be a joint American-Israeli cyber weapon, Stuxnet infected computers worldwide, spreading promiscuously but only affecting computers with specific software. Renowned documentarian Alex Gibney (Going Clear, Enron: The Smartest Guys in the Room) goes in search of the truth behind the weapon, and those like it that lie in wait for future use.

"In his new film, Oscar-winning documentary filmmaker Alex Gibney explores the phenomenon of Stuxnet, a self-replicating computer virus discovered in 2010 by international IT experts. Evidently commissioned by the US and Israeli governments, this malware was designed to specifically sabotage Iran’s nuclear programme. However, the complex computer worm ended up not only infecting its intended target but also spreading uncontrollably. Although to this day officially denied, Stuxnet was created by two allied forces who were each pursuing their own agendas, and in doing so opened up the Pandora’s box of cyber warfare..." (Berlin Film Festival)

While most people weren't looking, America went and changed the rules of engagement, and with "Zero Days," Gibney urgently suggests how little time the world has to clarify its stand before the wrong party goes too far.

In documentary filmmaking, as in news writing, there is a fine line between irresponsible alarmism and dispassionate reportage. And Mr. Gibney has a proven record of tiptoeing to the edge without going too far.

Zero Days is ... under attack from little stylistic worms that threaten to turn an otherwise solid doc on the evil that 21st-century hackers do into a hack job.

Gibney delivers plenty to think about - and fear.

The future is now, Gibney's documentary persuasively argues, and what it holds for all of us is as scary to contemplate as it may be impossible to ward off.

Because it wants to be a primer on a serious subject, an exciting cinematic exposé and an argument for more openness and some kind of regulatory framework, the necessities of these different strands end up getting in each other's way.