SRK Weaves His Magic in Zero

ZERO MOVIEW REVIEW
King Khan Back to Where he Belongs

Rating: 4 Stars
As they say form is temporary, but class is permanent. SRK finally comes out with a superlative performance, as Bauua Singh. Coming more than a year after “Jab Harry Met Sejal”, Zero showcases the Shahrukh who took risks at the peak of his career, with offbeat movies like Darr, Baazigar, Josh, Anjaam & Duplicate etc, where he played negative shades, even though he was a successful leading man. He’s not only come out of his comfort zone, but also challenged himself, in playing a vertically challenged dwarf man. Zero has given glimpses of SRK’s amazing talent, that propelled him to stardom with movies like Pardes, KKHH, DDLJ, My Name is Khan. Aanand Rai, who attained fame with Tanu Weds Manu, impresses in his directorial venture
Anushka Sharma, as Aafia also delivers one of her best performances till date. She is a top shot NASA scientist who suffers from cerebral palsy, but is heading a mission of sending a man to planet Mars. She falls for the charm & dimples of Bauua Singh. Bauua Singh is a happy go lucky guy from Meerut, whose dad is filthy rich. Even though he is a dwarf, his “I don’t care” attitude & his chilled out approach to life makes his character stand out. He feels God has already done the worst to him, by making him a dwarf. He enjoys life to the max & splashes his dad’s money on everything he wants or likes. At the peak of their love life, when they are about to get hitched, SRK leaves her right at the wedding function, as he can’t handle responsibility & being a self proclaimed free bird who just wants to fly.
The audience would love his dialogue delivery & dialect, especially a scene where he splashes 500 Rs.notes sitting atop his balcony, just because he feels like. And also the scene where Bauua Singh throws notes towards the screen as Katrina makes an entry on screen & utters the dialogue “Bring on all three Khans, here I stand meri Jaan”
Katrina Kaif as a Babita Kumari, who plays an accomplished Bollywood actress, but whose personal life is all screwed up, as her lover, Abhay Deol has ditched her. The movie also gives glimpses through her character, as to the inside turmoil of the successful leading ladies of Bollywood. How they have to hide their personal sorrows & heartbreaks from their fans & media. She also excels in her role. Her entry with the high tempo song “Husn Parcham” is really hot & seductive.
The director beautifully captures the transition of SRK from being in a relationship with Anushka & how he runs away from the marriage mandap to follow his dream of meeting Katrina in person, after participating in a dance competition & winning it . He then manages to woo Katrina with his charm & makes a real close bond with Katrina in her private space, only to realize later that he still loves Anushka deep inside . He then follows her to US & wins her back with his perseverance & mannerisms. The second half of the movie gets a bit dragged on especially the bit where SRK is selected to go into space with a chimp. All the excitement of the first half slowly seems disappearing, as the movie becomes more predictable.
Guest appearances by Late Sridevi, Juhi Chawla, Kajol, Rani Mukherji, Karishma Kapoor, Deepika Padukone & Alia Bhatt also add more flavour to the flick.
Music by Ajay-Atul is good. “Mera Naam Tu” by Abhay is a soulful & melodious song. “Husn Parcham” by Bhoomi Trivedi is a catchy high tempo song with awesome dance moves. “Ann-Bann is the stand out song for me. It also marks the comeback of Kunal Ganjawala. It’s a beautiful soulful melodious rendition in a typical Kunal style.

In all fairness, Zero is set to rock at the box office. With almost 20 crores (USD 2.85 mil) collected on day 1 of it’s release, it’s already making waves @ the box office. Audience are surely loving SRK’s foray back into where he belonged. His attempt at this challenging role is surely going to leave it’s mark. Hope we see more such moves by king khan in coming years. 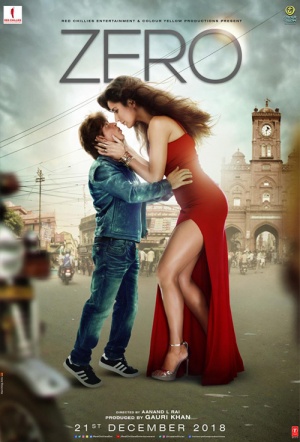