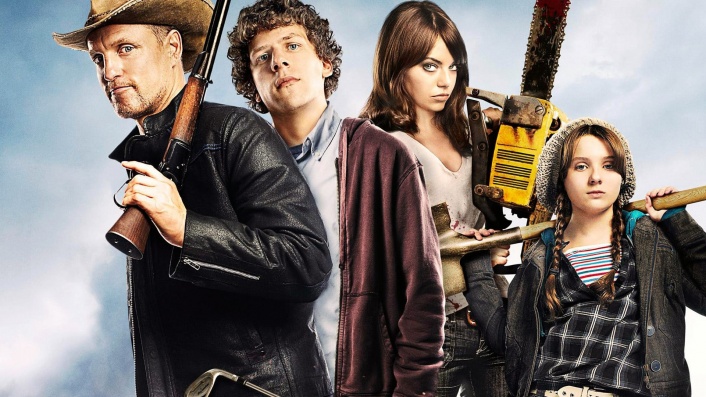 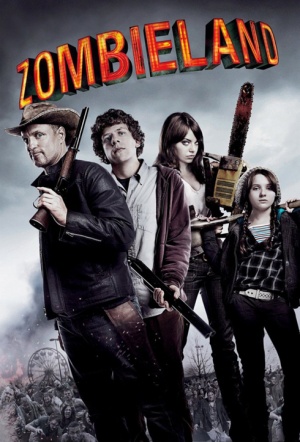 A horror-comedy set in a world overrun by zombies. Columbus (The Squid and the Whale's Jesse Eisenberg) is a big wuss – but when you're afraid of being eaten by zombies, fear can keep you alive. Tallahassee (Woody Harrelson) is an AK-toting, zombie-slaying' bad ass whose single determination is to get the last Twinkie on earth. As they join forces with sisters Wichita (Superbad's Emma Stone) and Little Rock (Little Miss Sunshine's Abigail Breslin), who have found their own ways to survive the zombie mayhem, they're left to contemplate which is worse: relying on each other or succumbing to the zombies.

Also features a brilliant cameo from Bill Murray as himself.

Benefiting from the very different but very appealing comedy styles of Woody Harrelson and Jesse Eisenberg even when the script's wit runs thin, this should be catnip to jaded genre fans.

A minor diversion dripping in splatter and groaning with self-amusement.

Guilty-pleasure movies should not be underestimated. I had a scary-fun-house blast at Zombieland, in which studly Woody Harrelson, nerdy Jesse Eisenberg, sexy Emma Stone and sunshiny Abigail Breslin roam a near-dead world kicking zombie ass.

First-time feature director Ruben Fleischer brings impeccable timing and bloodthirsty wit to the proceedings. Cinematographer Michael Bonvillain captures some interesting images amid the post-apocalyptic carnival of carnage, as when he transforms the destruction of a souvenir shop into a rough ballet.

Falling closer in tone to "Shaun of the Dead" than "28 Days Later" or the George Romero movies, Zombieland has its tongue planted firmly in its rancid cheek while still delivering the visceral goodies.