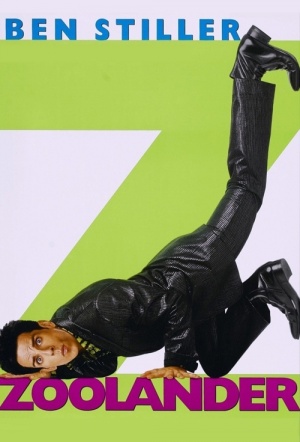 Ben Stiller (also writer and director), Owen Wilson and Will Ferrell star as male model morons in this comedy set in the world of fashion. Derek Zoolander (Stiller) is VH1's three-time model of the year, but his crown is threatened with the arrival of Hansel (Wilson) - "he's so hot right now". Upon retirement, the fashion guru Mugatu (Ferrell) seizes the opportunity to brainwash the down-and-out Derek, turning him into a killing machine. His target: the Prime Minister of Malaysia.

This light silly and fluffy satire of the fashion industry targets for a change not the female but male models.

If the Malaysians made a comedy about the assassination of the president of the United States because of his opposition to slavery, it would seem approximately as funny to us as Zoolander would seem to them.

Though basically an extended skit, Zoolander never runs out of amusing satiric thrusts.

At times Zoolander threatens to disappear up its own catwalk, but it's often very funny stuff.