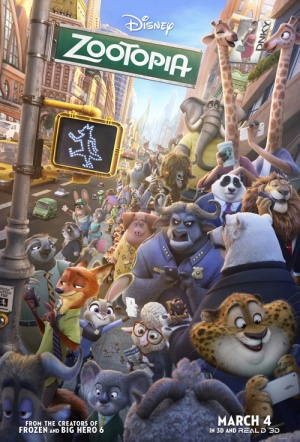 The directors of Wreck-It Ralph and Tangled team up for this Disney family animated comedy set in a world where humans never existed, leaving the Earth populated with walking, talking, texting animals of all different breeds.

Ginnifer Goodwin (Once Upon a Time) voices Judy Hopps, a bright and motivated bunny looking to make a difference by being the first rabbit police officer. Looking to prove her worth to the unconvinced chief of police, she takes on a missing person’s case. Unfortunately for her, she needs the help of a sly and uncooperative fox, voiced by Jason Bateman (Arrested Development). As the clues start to roll in, the pair gets a whiff of something sinister underlying Zootopia, but just when the case appears to be cracked, the city and all its citizens face an even greater threat…

Also features a track from pop singer Shakira, who voices a gazelle in the film named, erm, Gazelle.

Disney has lit a stick of rainbow dynamite, and it threatens to blow away Shane Black’s The Nice Guys for Best Buddy-Cop Film of 2016. Set in a world of talking animals, Zootopia not only uses this conceit (done to death in animation) to tell a deceptively clever crime tale, but to also to highlight the importance of diversity and the danger of discrimination.

It is, in short, a city that only the Mouse House could imagine, and one that lends itself surprisingly well to a classic L.A.-style detective story...

Intelligent and fascinatingly detailed – it feels more like a movie by Disney-owned Pixar than a straight Disney film.

Funny, smart, thought-provoking - and musical, too.

A tour through the byways of Zootopia is a bracing blend of color and richly detailed design.

Bursting with a rich blend of timely themes, superb voice work, wonderful visuals and laugh-out-loud wit... quite simply a great time at the movies.

Expertly combines keen wit with a gentle, and very timely, message of inclusivity and empowerment.

An engaging animation for all ages.