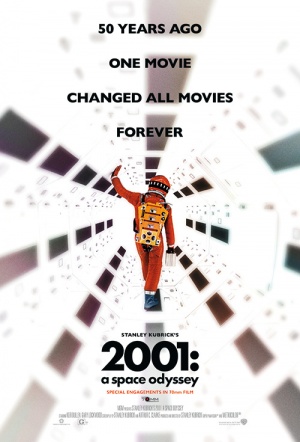 Stanley Kubrick's ambitious science-fiction epic, billed as "a countdown to tomorrow, a road map to human destiny, a quest for the infinite". This is the 70mm film release.

Kubrick starts with human's prehistoric ape-ancestry past, then leaps millenia (via one of the most mind-blowing jump cuts ever conceived) into colonised space, and ultimately whisks astronaut Bowman (Keir Dullea) into uncharted realms of spacey.

With the release of Stanley Kubrick's enigmatic space spectacle in 1968, the science-fiction film finally came of age.

Lingers on the mind like a tall, black riddle: Where are the new bones, the new tools, that will take us higher? Do we even deserve them?

Somewhere between hypnotic and immensely boring.

Like all good speculations, it leaves the spectator up in the air with a tantalising vision as food for thought.

The film creates its effects essentially out of visuals and music. It is meditative. It does not cater to us, but wants to inspire us, enlarge us.