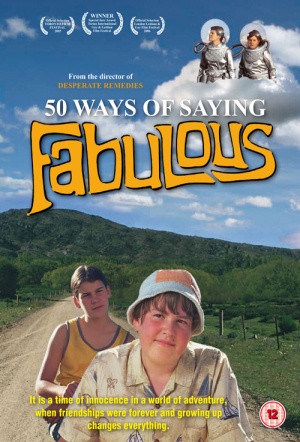 A coming of age tale, following 12 year old Billy (Patterson), who has the misfortune to be growing up gay in Otago in the 70’s. He’s obsessed with the heroine of his favourite TV show, awful at rugby and upstaged by his tomboy cousin Lou (Beattie). While Lou is tough enough to get away with being different, Billy is the target for bullies, at least whenever Lou can't protect him.

Things take a turn with the arrival of the gawky, slightly older Roy (Collins). Billy is torn between gratitude at having a new friend and glee at finally having somebody even lower on the social totem pole. As Billy gets increasingly, secretly intimate with Roy, he comes under pressure to deride him in front of others. Meanwhile things get trickier still when Billy starts obsessing over hunky farmhand Jamie (Dorman).

Downplaying the camp, gender-bending and fantastical elements of his 1993 debut feature, adventuresome bodice-ripper "Desperate Remedies" (but only by comparison), Kiwii writer-helmer Stewart Main's overdue sophomore effort is a kidpic-of-sorts that ends up being just as peculiar. Incongruously mixes a frolicksome tone with disturbing content. Results work on their own distinctive terms, though some viewers may find the film off-key, overfamiliar in gist, or in questionable taste...

The ravishing landscapes of Central Otago are not enough to save this wooden and ill-conceived memoir of childhood, although there are some good teenage performances...