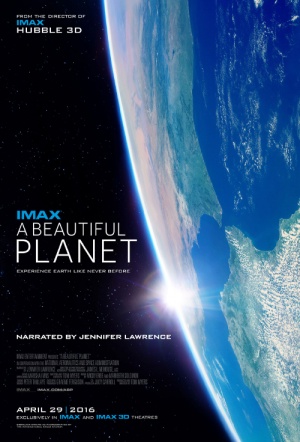 An exploration of Earth and beyond as seen from the International Space Station. From the creators of Hubble 3D and narrated by Jennifer Lawrence.

"A breathtaking portrait of Earth from space, providing a unique perspective and increased understanding of our planet and galaxy as never seen before. Made in cooperation with NASA, the film features stunning footage of our magnificent blue planet - and the effects humanity has had on it over time - captured by the astronauts aboard the International Space Station (ISS). From space, Earth blazes at night with the electric intensity of human expansion - a direct visualization of our changing world. But it is within our power to protect the planet. As we continue to explore and gain knowledge of our galaxy, we also develop a deeper connection to the place we all call home." (IMAX)