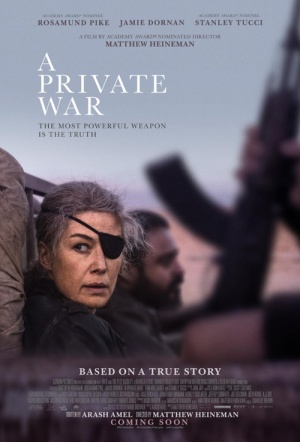 Colvin is an utterly fearless and rebellious spirit, driven to the frontlines of conflicts across the globe to give voice to the voiceless, while constantly testing the limits between bravery and bravado. After being hit by a grenade in Sri Lanka, she wears a distinctive eye patch and is still as comfortable sipping martinis with London’s elite as she is confronting dictators. Colvin sacrifices loving relationships, and over time, her personal life starts to unravel as the trauma she’s witnessed takes its toll. Yet, her mission to show the true cost of war leads her — along with renowned war photographer Paul Conroy (Dornan) — to embark on the most dangerous assignment of their lives in the besieged Syrian city of Homs.

As conflicts around the world continue to displace and murder millions, and some of us in far safer imperialist climes sit and wonder what's to be done, A Private War gives testament to the power of Marie Colvin's troubled, remarkable life.

The Sunday Times war correspondent Marie Colvin gets the prestige biopic treatment in a film that boasts a fearless performance from its star, Rosamund Pike, and yet is undercut at every turn by a risible and self-defeating screenplay.

There are a few clumsy moments, but for the most part, this is a serious-minded and unsensational study of an extraordinary journalist who sacrificed everything in the line of duty.

It's that this fierce, lived-in performance, complete down to the drawn face and go-for-it personality, is so convincing that people who knew Colvin were shaken at the resemblance.