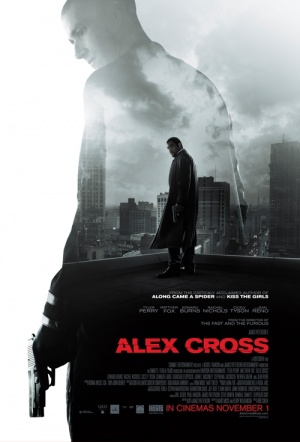 Based on the 12th book of James Patterson’s series of crime novels, Alex Cross (Tyler Perry, Star Trek) is a homicide detective and psychologist who meets his match with a psychotic mob hitman (Matthew Fox, Lost). The two face off in a high-stakes game of cat and mouse, but when the mission gets personal, Cross is pushed to the edge of his moral limits.

Morgan Freeman previously played the role of Cross in the films Kiss the Girls and Along Came a Spider.

In drag or out of it, the soft-spoken star has rarely been less convincing than when locking and loading from his home arsenal or dangling from a decaying Detroit edifice.

A disjointed thriller with t0o many characters rattling around.

As for Fox, he’s stuck playing an underwritten villain with no particular motivation for torturing victims in such gruesome fashion. So he goes way overboard, filling in the gaps with a twitchy, eye-bulging performance worthy of a Razzie Award.

Cross has a really bad temper, really big guns and really bad dialogue. He will use all of them excessively if pushed.

You almost feel sorry for Tyler Perry, stepping out of his own universe for the first time to try to expand his range and finding himself in something as thoroughly dismal as Alex Cross.

Rebooting novelist James Patterson's famous 'Alex Cross' character for the big screen, Tyler Perry aims at new cinematic territory and scores a bullseye as the Detroit detective embroiled in a hunt for a mega-evil killer that turns personal.