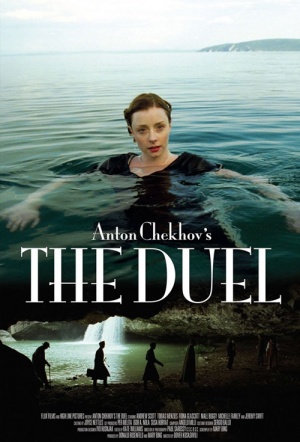 Period drama based on Chekhov's 1891 novella.

"The Duel gives pictorial life to a classic Chekhovian tale and brings much shrewd understanding to its ageless tale of temperamentally opposed 20-somethings acting out. Laevsky, a moody young aristocrat, and Nadya, his fickle (married) mistress, have retreated from the city to a summering spot by the Black Sea. Their growing mutual tetchiness catches the disapproving eye of Van Koren, a handsome zoologist (and avid Darwinian) working nearby. Shot gorgeously, in limpid, deep hues, in Croatia, the film is performed acutely well by a perfect ensemble of mainly English and Irish actors." (NZ International Film Festival 2011)

Once again, Mr. Kosashvili mixes moments of bitterness and laughter with strong dramatic passages, creating a social milieu in The Duel that is believably inhabited, consistently surprising and true-feeling in detail and sweep.

Somehow isn't as exciting as a duel over a woman should be.

If it weren't for the masterful work of director Dover Kosashvili, this rich, evocative film wouldn't have nearly the impact it does.

The performances are excellent all around, with Scott mesmerizing as the emotionally volatile Laevsky and the gorgeous Glascott making vividly clear why her character drives all the surrounding men to distraction.

It's a pleasure simply to linger in the characters' company, or at least to watch them from just far enough away to observe them without being judged in return.