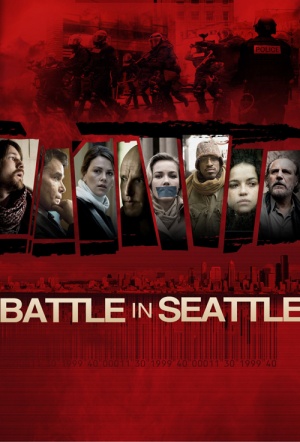 Set in Seattle, in November 1999, when thousands of protestors took to the streets to take a stance against the World Trade Organistation. Among them are Django (Andre Benjamin), Lou (Michelle Rodriguez) and Jay (NZ's Martin Henderson). Ray Liotta plays the mayor of Seattle, and Charlize Theron his pregnant wife. All their stories intertwine as the peaceful demonstration quickly escalates into a full-blown riot.

You can divide this film into two parts. On one hand there are the riot recreations and the visual style employed to put them up on screen. Conversely, you have the multiple narratives and storyline elements.

Picture's ambition, cogency and decent performances make up for its uneven aspects. Woody Harrelson has some especially good moments as a cop.

A drama is only as convincing as its characters. The people awkwardly forced together in Battle in Seattle are rhetorical mouthpieces tied to the sketchy plotlines of a so-so Hollywood ensemble movie.

The result is not quite a documentary and not quite a drama, but interesting all the same. It uses the approach of Haskell Wexler's "Medium Cool" (1969), but without the same urgency.

As a political statement it might be too much, too late. But as film it's still a moderately exciting storming of the barricades.

As a political statement it might be too much, too late. But as film it's still a moderately exciting storming of the barricades.

Townsend's sincerity, his admiration for the idealism of the people behind the anti-WTO protests, is never in doubt, but combining drama with historical re-creation is frankly a challenge his filmmaking skills are not up to.

While it makes no bones about where its sympathies lie, these fictional stories show a genuine fascination with the role politics plays on both sides of such confrontations and how things can spin out of control with no single person to blame.