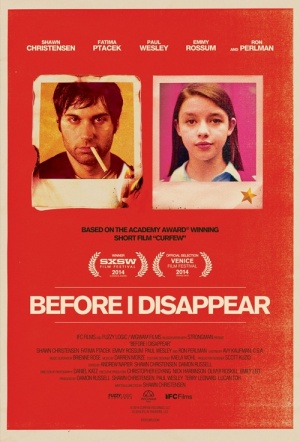 Disturbed Gideon - at a low point in his life - is tasked with looking after his straight-laced niece in New York City in this drama adapted from star-writer-director Shawn Christensen's Oscar-winning short (Curfew, 2012). Audience Award winner at SXSW.

As his life hits rock bottom, Richie (Christensen) decides to kill himself. But the attempt is interrupted by an urgent request from his estranged sister (Emmy Rossum), who needs him to babysit her precocious daughter (Fatima Ptacek). So begins a madcap tour of Manhattan after dark.

Before I Disappear / Reviews

The sort of movie that can't stop reminding you how cruel the world is and how messed up its people are.

A posey, abrasive drama, though one that's stylishly made and acted with more conviction than the script merits.