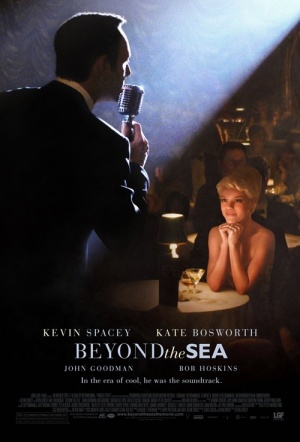 Starring and directed by Kevin Spacey, Beyond The Sea chronicles lounge crooner Bobby Darin. With drama and musical set-pieces, it follows his ascent from '50s bubblegum pop to his tuxedo-clad heyday in the 60s, and hippy rebirth in the '70s.

A sickly boy, Walden Robert Cassotto (Ullrich) is told he'll never see his 15th birthday, sparking a quest for immortality that sees him become 'Bobby Darin' (Spacey): a chart-topping act with rock'n'roll ditty 'Splish Splash'. Not content with teen idol status, however, he turns to acting and meets screen darling Sandra Dee (Bosworth). She becomes his long-suffering wife, watching her own star plummet as Darin soars with an album of big band standards and even bags an Oscar nod. Nonetheless he remains unsatisfied, and his relentless ambition becomes the cause of old health problems resurfacing.

Beyond The Sea / Reviews

Doing his own singing (an uncanny imitation), Spacey is a marvel...

Put simply, the film is a dazzling and fearless piece of showmanship...

Kevin Spacey, both as star and director, has created a hugely entertaining, highly empathetic portrait of a man for whom music was literally the thing that kept him alive...

Such a hopeless mess that there's no fun in tossing insults at its endless shortcomings...

Ambitious and unexpected, with stylish musical numbers and a sympathetic performance from Spacey...

Besides energetic song-and-dance numbers, Darin's exchanges with his younger self (an endearing Ullrich) are surprisingly poignant. Likewise Spacey treats the darker aspects of Darin's life with sensitivity, thankfully avoiding a descent into melodrama. It occasionally drifts off course, but for the most part Beyond The Sea is a buoyant tribute...