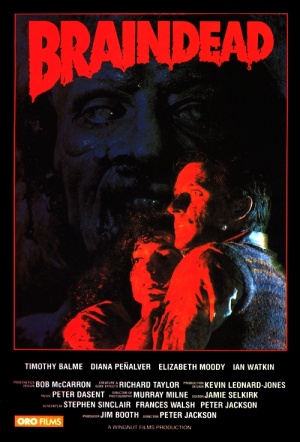 Peter Jackson's extremely gory, blood drenched zombie horror comedy, his third feature film. Tim Balme is Lionel, a mummy's boy who has his hands full trying to woo Paquita (Diana Penalver) and deal with a zombie outbreak in Wellington after his mum (Elizabeth Moody) gets infected via a Sumatran Rat Monkey bite.

The best to date from Kiwi gore specialist Peter Jackson.

The finale, in which Lionel reduces a horde of flesh-eaters to a mulch of blood, flesh and offal with the aid of a flymo, is probably the goriest scene ever.

Because all of this looks blatantly unreal, and because the timing of the shock effects is so haphazard, Dead Alive isn't especially scary or repulsive. Nor is it very funny.