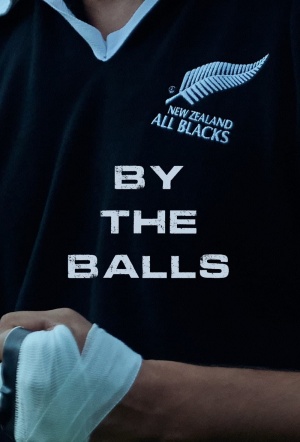 Documentary retrospective on the 1980s rebel tour to South Africa, a brutal and turbulent time for New Zealand rugby, told from the point of view of the players themselves.

"In the lead up to the first Rugby World Cup in 1987, the All Blacks were in disarray. A rebel tour to South Africa lead to deep divisions within the team and the nation as a whole. Only two players, David Kirk and John Kirwan, refused the lucrative payments on offer to what were then amateur players to tour the Republic. Meanwhile, the bombing of the Rainbow Warrior and the protests against nuclear testing in the Pacific added a significant amount of spice to upcoming matches against the French national team ... An extensive selection of archival material and seamlessly integrated re-enactments all serve to take us back to a time when sport and politics most definitely did mix." (New Zealand International Film Festival)

By the Balls / Reviews

With its entertaining and enlightening mix of archival footage ... pop-culture moments and a soundtrack that includes Blam Blam Blam and The Dudes ... [this documentary] fully deserves to find a large audience.