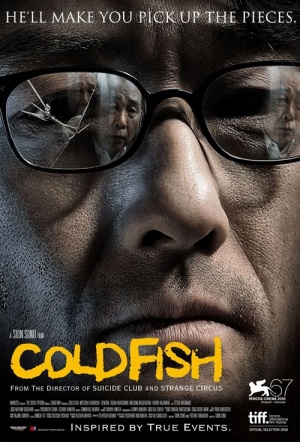 Japanese slasher-thriller from cult director Sono Sion about a tropical fish store owner who befriends an affable gent who is also in the tropical fish selling business. But behind the friendly smile of this new pal lies a horrific and deadly secret. Inspired by true events known in Japan as the "Saitama serial murders of dog lovers".

"Fans of Sono Sion’s Love Exposure won’t need much of a push to see this perverse chunk of black comedy horror. Funny, exhausting, callous and ultimately devastating in its final reel, this is one blood-drenched character study that’s hard to shake." (Source: NZ International Film Festival 2011)

Trailer
12%
want to see
See all