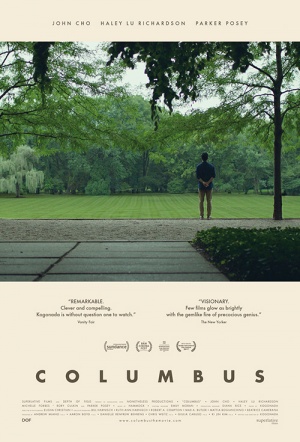 "Jin (John Cho) is a middle-aged man who should care that his father is dying in a hospital, but he doesn’t. Casey (Haley Lu Richardson) is a recent high-school grad who needs to cut the cord, but that’s complicated. The two shouldn’t like each other in any sort of romantic way, but that’s also complicated. Kogonada includes all the troubles Indianans face – meth problems, having to work two manual-labor jobs to pay rent, racial tension – but he smartly builds it into the characters’ motivations and backstory." (New Zealand International Film Festival)

An assured and hypnotic debut from tyro writer/director Kogonada with a terrific cast.

A clever and compelling exploration into how physical structures can come to represent emotional landmarks in our personal lives.

"Columbus" is one of the rare films in which nerdy intelligence-knowledge without experience-comes off without neurosis, comedic awkwardness, or vengeance.

Columbus is a coolly executed drama, and low on event – at one point [a character] comments: “This isn’t the movies. Nothing’s going to happen.”

A specialised art house treat that announces the arrival of a new director who combines small-scale, Ozu-like humanism with an impressive command of the formalist possibilities of film.