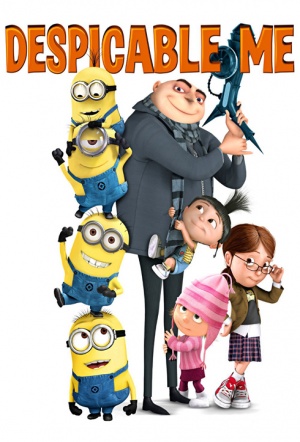 This animated comedy, from the writers of Horton Hears A Who, follows Gru (Steve Carell), an evil genius masterminding the biggest heist in history: to steal the moon. His wicked ways go unchecked as he plots and schemes from his lair and manages to steal several world landmarks. One day, however, he meets his match in three little orphan girls named Margo, Edith and Agnes, who just want him as their dad.

Kiwi comedian Jemaine Clement is one of the many vocal talents, which include Danny McBride, Will Arnett, Kristen Wiig and Julie Andrews.

There's nothing like a little world domination to melt the most dastardly evildoer's heart. Since villains so often steal the show in animation, Despicable Me smartly turns the whole operation over to megalomaniacal rogue Gru.

Despicable Me cannot be faulted for lack of trying. If anything, it tries much too hard, stuffing great gobs of second-rate action, secondhand humor and warmed-over sentiment into every nook and cranny of its relentlessly busy 3-D frames.

The film is funny, energetic, teeth-gnashingly venomous and animated with an eye to exploiting the 3-D process with such sure-fire techniques as a visit to an amusement park. The sad thing, I am forced to report, is that the 3-D process produces a picture more dim than it should be.

I loved it – and make sure you stay for the credits.

The film throws so much ersatz cleverness and overdone emotion at the audience that we end up more worn out than entertained.

Despicable doesn't measure up to Pixar at its best. Nonetheless, it's funny, clever and warmly animated with memorable characters.

The sort of animation used in Despicable Me perfected by Pixar, and used in dozens of movies over the past few years is a gift to film-makers. It manages to be so realistic at times that you can forget it isn't real.

It's not as dazzling as your average Pixar film, but fifDespicable Meltf is a fun, plucky movie, with its not-so-despicable heart in the right place. Guaranteed to entertain a wide range of ages.