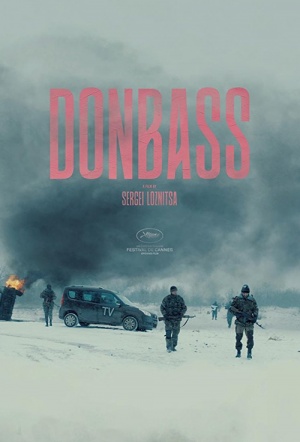 Black comedy that dissolves the conflict in eastern Ukraine. From writer-director Sergei Loznitsa (In the Fog).

In the Donbass, a region of Eastern Ukraine, a hybrid war takes place, involving an open armed conflict alongside killings and robberies on a mass scale perpetrated by separatist gangs. In the Donbass, war is called peace, propaganda is uttered as truth and hatred is declared to be love. A journey through the Donbass unfolds as a chain of curious adventures, where the grotesque and drama are as intertwined as life and death. This is not a tale of one region, one country or one political system. It is about a world, lost in post-truth and fake identities. It is about each and every one of us.

A scathing portrait of a society where human interaction has descended to a level of barbarity more in keeping with late antiquity than the so-called contemporary civilized world.

Donbass is a flawed, but vivid achievement.

Ukrainian filmmaker Sergei Loznitsa couches his bleak humour in documentary-like settings to create an environment that is unsettling and increasingly warped by its own logic.

A sprawling black comedy with a vast ensemble cast, it evokes a chaotic state of social breakdown in the Donbass region of Ukraine, often with virtuoso brilliance, but its sometimes over-stretched vignettes can easily tax the overwhelmed viewer.

A brilliant formalist, Loznitsa likes to turn his camera on crowds in motion, turning each sequence into a collective indictment.

Loznitsa builds up a portrait of a bitter clockwork world where the faces of the doomed are above all part of a landscape.