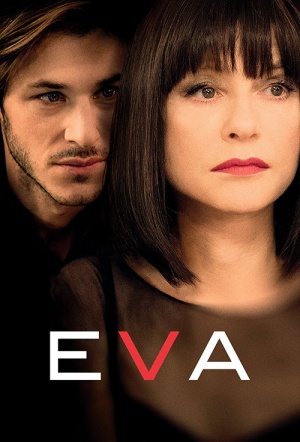 A playwright's infatuation with a mysterious woman (Oscar nominee Isabelle Huppert) leads to his downfall in this French drama based on James Hadley's Chase's novel.

"When an elderly writer dies in his bathtub one night, only a single person knows the secret existence of his last manuscript: Bertrand (Gaspard Ulliel, It's Only the End of the World), a young man who is also accidental witness to the writer's death. Bertrand has the deceased's last play performed under his own name and is intoxicated by its success. But the world is soon eager for another work from this supposed young literary genius. In the midst of his attempts to put a new creation to paper, Bertrand encounters an attractive but mysterious woman named Eva. To him, she is much more than merely a high-class prostitute, and their conversations flow directly into the dialogue of his new play. But he finds it impossible to penetrate Eva’s emotional armour. Nobody must know what really drives her – least of all this arrogant upstart, whose sexual dependency she exploits but whom she certainly does not trust. Bertrand becomes ensnared in an emotional entrapment that leads to catastrophe." (Berlin International Film Festival)

All the narrative's blank spaces, previously well-guarded by editor Julia Gregory, collapse into a fudged finale of stuttering irresolution.

No-one does mysterious, distant femmes fatales quite like Isabelle Huppert - but just because an Huppert character is enigmatic, it doesn't necessarily mean she's fascinating.

Eva boasts little style beyond what its biggest star is able to bring to the table.

An enticing premise that fails to catch fire.