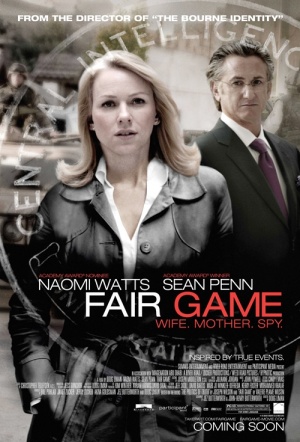 Action-thriller based on the autobiography of real-life undercover CIA operative Valerie Plame (Naomi Watts), whose career was destroyed and marriage strained to its limits when her covert identity was illegally exposed.

As a convert officer in the CIA's Counter-Proliferation Division, Valerie leads an investigation into the existence of weapons of mass destruction in Iraq. Valerie's husband, diplomat Joe Wilson (Sean Penn), is drawn into the investigation to substatiate an alleged sale of enriched uranium from Niger. But when the administration ignores his findings and uses the issue to support the call to war, Joe writes a New York Times editorial outlining his conclusions and ignites a firestorm of controversy.

Fair Game serves up impeccable politics with a bit too much righteous outrage and not quite enough solid drama.

Things worked out between Joe and Valerie, and for their real-life models, who are now the subjects of a terrifically entertaining movie. But that does not mean that justice was done, or that truth prevailed.

What's effective is how matter-of-fact Fair Game is. This isn't a lathering, angry attack picture.

Liman outfits the film with spy-thriller packaging worthy of his "The Bourne Identity," so the film probably will attract above-average coin and possibly awards attention.

In the filmography of liberal-skewing, Bush-era true stories, this is a measured, persuasive item. It's questionable whether there's an appetite for hanging out more of the last decade's dirty laundry to dry in the multiplexes or 'For Your Consideration' awards bids, though.