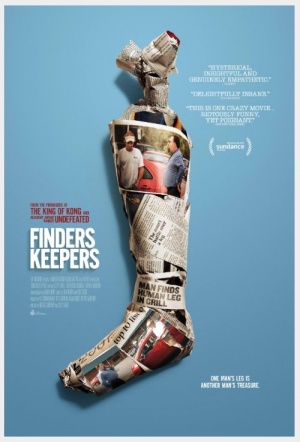 "Shannon Whisnant has a nose for a bargain. But when he bought a used grill at a North Carolina auction, the severed human foot he found among its ashes was not part of the deal. Soon the gruesome discovery becomes the toast of the infotainment world, and the new owner spies a golden opportunity to cash in on the media frenzy, until struggling addict and amputee John Wood recognizes his missing member and demands his own foot back. It is the stuff of documentary legend. Bizarre twists of fate with perfectly twisted characters take center stage in a courtroom battle with television's Judge Mathis, exploding this classic small-town feud to epic proportions as their 15 minutes of fame turns their lives upside-down and they find themselves basking under the heat lamps of the international talk-show circuit." (Sundance Film Festival)

As hysterical as it is insightful, this documentary finds the humanity behind a TV news freakshow.

There’s much to savour in this deep fried documentary about a man who finds a foot in his second-hand barbacue – and how reality TV handled it.

Tries to find the humanity in the absurd, and while it surely has its share of moving moments, the conciliation of the sensational and profound is hard to reconcile.