From the Land of the Moon (Mal de Pierres) 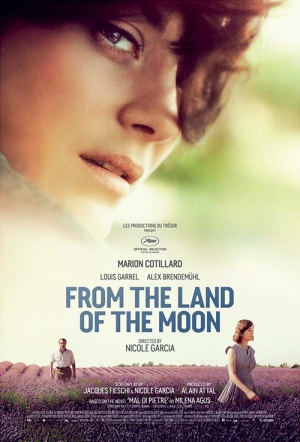 Oscar-winner Marion Cotillard plays a woman in a loveless marriage who falls for another man in this adaptation of Milena Agus's eponymous novel set post-WWII.

"Gabrielle (Cotillard) lives in a small village in the south of France, at a time when her dream of true love is considered scandalous, and even insane. Against her will, Gabrielle’s parents marry her to José (Alex Brendemühl), an honest and loving Spanish worker who they think will make a respectable woman of her. When she is sent away to the Alps to treat her kidney stones, André (Louis Garrel), an injured veteran of the Indochina war, rekindles the passion buried inside of her." (Alliance Française French Film Festival)

From the Land of the Moon (Mal de Pierres) / Reviews

The result, despite an uncertain start, is in the end a surprisingly intriguing and affecting movie.

The film takes on Gabrielle's listlessness, slumps into an opiated fug. The malady is mysterious and not easily treatable. It just exhausts you.

The ingredients of an old-fashioned romantic weepie are given class and conviction by director Nicole Garcia whose elegant restraint helps to ground the more fanciful elements in some sense of reality.

This smoothly told tale is more of a character study than a romance, yet should still draw fans of romance fiction who will particularly appreciate Louis Garrel in the role of the dashing lieutenant Andre Sauvage.