Gebo and the Shadow 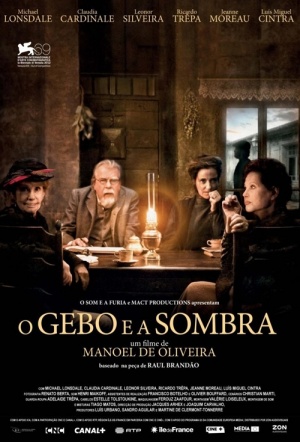 A poor patriarch must sacrifice himself to protect his fugitive son in this French drama set in the late 19th century. Based on a play by Portuguese writer Raul Brandão and helmed by Manoel de Oliveira who, at over 100 years of age, is the world's oldest working film director with a career spanning from the silent era to the digital present.

"The setting is a cramped, chilly room off a desolate courtyard, sometime in the late nineteenth century, where a poor, elderly couple, Gebo (Michael Lonsdale) and Doroteia (Claudia Cardinale), are haunted by the eight-year absence of their prodigal son, whose wife, Sofia (Leonor Silveira), they have taken in. He’s the shadow who darkens the family’s meagre and narrow existence, and then he makes his fiery-eyed, defiant return. The young man, João (Ricardo Trêpa), is a scruffy-bearded, jumpy, Dostoyevskian rebel who boasts of his life of crime and impenitently, even sadistically threatens to rend what’s left of the family’s threadbare bonds." (The New Yorker)