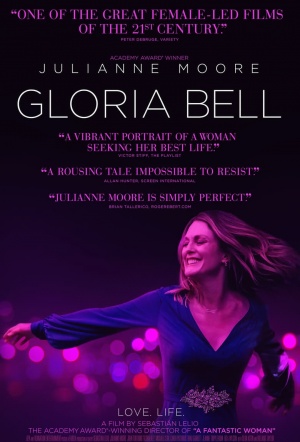 Julianne Moore and John Turturro lead this romantic drama from Sebastian Lelio (A Fantastic Woman) which is a reimagining of his 2013 film of the same name.

"Gloria adores her adult children (Michael Cera and Caren Pistorius), but she's interested in being more than a grandmother. She loves to spend her evenings dancing in singles clubs, hoping to meet Mr. Right. It all seems to be falling into place when she meets the recently divorced Arnold (Turturro), who falls for her bright smile and sees the beauty behind her oversized glasses. But Arnold's ex-wife and grown-up daughters have an unhealthy hold on him, and it seems he doesn't know how to let go of the past - or his incessantly ringing mobile phone." (Toronto International Film Festival)

Moore is great in the movie, uncovering - and sharing - all sorts of new facets to Gloria's character, but Turturro is a revelation...

Lelio weaves some casual visual poetry into the film, bursts of color and motion that briefly hint at something surreal just on this film's margins. He mostly relies on Moore, though. With good reason!

It really should be a Marvel-level event that Gloria Bell sees Moore adding to her L.A. pantheon in a major way. Don't let the movie's deceptively banal title fool you - this is as complete and full-bodied a performance as you're likely to see all year.

We're all so angry about "the other" - whomever that "other" might be - that it has come to stand in the way of understanding ourselves. Gloria Bell helps bring us back to that self, whoever he, she or they might be.

As a performer, Moore can go big, and a terrible yowl here pierces the heart. But she's a virtuoso of restraint.

Gloria Bell pairs perhaps the best portrayer of troubled or lost women with a director who has built a career building stories around them, and the result is a film that comfortably banishes any fears of some neutered US remake.

Don't go expecting a rom-com, or any of the patronising cliches associated with the genre. Just go for a hugely entertaining slice-of-life, delivered by the best in the business.

A precision-engineered showcase for Julianne Moore.

Gloria Bell maintains a warm but rigorously unsentimental tone despite material which could easily lend itself to mawkish sentimentality.