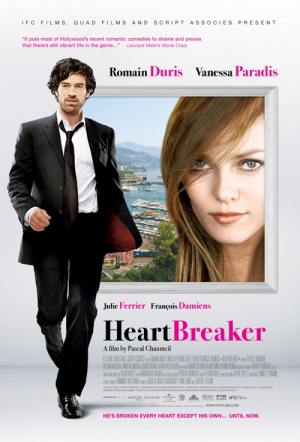 French romcom about Alex (Romain Duris, The Beat That My Heart Skipped), a professional heartbreaker who for a fee can turn any husband, fiancé or boyfriend into an ex.

His latest job: a wealthy heiress named Juliette (Vanessa Paradis, Girl on the Bridge). With ten days until the wedding, Alex has been hired by her father to carry out the seduction that risks him being caught by ruthless personal creditors, angry exes, and the beautiful and independent Juliette herself.

Combining the glamour of "To Catch a Thief" with the ruckus of a Ben Stiller movie, TV vet Pascal Chaumeil's French Riviera-set intrigue stars Romain Duris.

If you fancy something a bit breezy and nothing too serious, Heartbreaker is the perfect remedy - and probably best you see it now, before the inevitable American remake hits our screens.

Slickly orchestrated by director Pascal Chaumeil, Heartbreaker never leaves one in any doubt about its ultimate fairytale destination, although there are several amusing detours along the way.

Yes, Heartbreaker is diverting, intermittently charming and occasionally funny, but it is also a jumble of jammed-together notions. Unevenly paced, it goes on too many tangents to cohere as a persuasive comic fable about love and money.

Slick entertainment is rarely as, yes, slickly entertaining as it is in Heartbreaker, a French romantic farce that is commercial cinema at its most successful.

A romantic-comedy that packs charm, humour and warmth in spades.