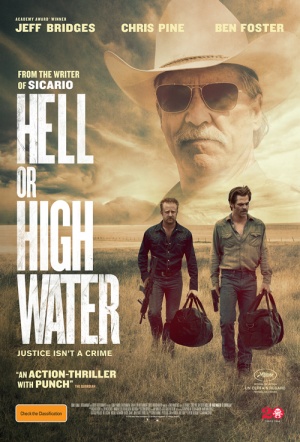 Chris Pine (Star Trek), Ben Foster (The Program) and Oscar-winner Jeff Bridges lead this contemporary Texan bank-robbing thriller. From the director of Starred Up and the writer of Sicario.

A story about the collision of the Old and New West, two brothers — Toby (Pine), a straight-living, divorced father trying to make a better life for his son; and Tanner (Foster), a short-tempered ex-con with a loose trigger finger — come together to rob branch after branch of the bank that is foreclosing on their family land. The hold-ups are part of a last-ditch scheme to take back a future that powerful forces beyond their control have stolen from under their feet.

Vengeance seems to be theirs until they find themselves in the crosshairs of a relentless Texas Ranger (Bridges) looking for one last triumph on the eve of his retirement. A showdown looms at the crossroads where the last honest law man and a pair of brothers with nothing to live for, except family, collide.

Coming off like a Southern-fried Coen Brothers noir minus the suffocating nihilism, David Mackenzie’s ninth feature functions impressively on multiple levels. It’s a rustic, poignant tale of brotherhood, sacrifice and redemption. It’s a sobering elegy for the economically dispossessed - think 99 Homes in boot spurs and a cowboy hat. It’s also the sort of tight, terse, old-school crime drama one can imagine Don Siegel cranking out in the '70s. Whichever way you slice it, it’s a darn good flick.

You've seen it all before - but hell, it's worth seeing again.

It has a straight-down-the-highway momentum, interesting stakes, and more textured character work than you can shake a stick at.

It's an action-thriller with punch; Bridges gives the characterisation ballast and heft and Pine and Foster bring a new, grizzled maturity to their performances.

A heady cross-between No Country for Old Men, Seven Psychopaths and 99 Homes...

Manages to be guns-ablaze exciting, a tenterhooks thriller, a fine judge of character, and a commentary on the economic times.

This is a modern-day Western, a heist story of filial love, but unexpectedly pulsing with a deep social conscience. How brilliant.

As much as all four men are familiar types, the director, writer and actors imbue them with humanity, steering their arcs through tense action.

Taut, tense and burnished by Jeff Bridges at his best. This is a deceptively simple tale of Texan cops and robbers that drags the Old West into the modern age.