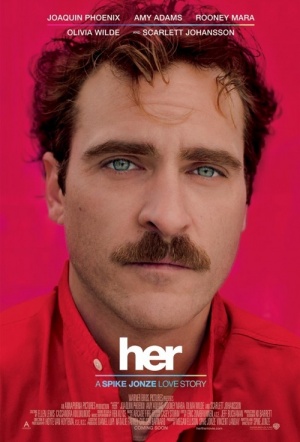 Oscar and Golden Globe-winning futuristic romantic comedy from writer-director Spike Jonze (Being John Malkovich) whose screenplay took out awards, starring Joaquin Phoenix as the lonely Theodore. After buying a newly developed talking operating system (voiced by Scarlett Johansson), Theodore - to his surprise and concern - finds himself in the midst of romantic relationship with a piece of intelligent technology. Co-stars Amy Adams and Rooney Mara.

In a near-future world, Theodore's days consist of pulling up his high-waisted pants and heading into work where he writes personalised love letters on other people's behalf. His own love life is non-existent, still processing the break up of his marriage to Catherine (Mara), from whom he is soon to be divorced. When Theodore buys a new operating system powered by an artificial intelligence he's surprised to find a deep, personal connection form, and he embarks on a life-changing romantic experience.

Spike Jonze has a history of injecting emotion and humanity (awkwardly clothed and coiffured as it might be) into his idiosyncratic films. That’s prevented them from being completely in the thrall of their crazy narratives but they have still been dominated by their core wackiness. For the first time with Her, the relationships Jonze brings to the big screen blossom into something bigger than the story and setting around them.

What can be said for a movie that's a lot more interesting to think about than watch?

It strikes me as the sort of thing made by someone who could use some actual problems to worry about.

Dazzling and inventive but a little too cool to fall in love with...

We need more subplots. (Even just one.) Instead we get a life sentence of staring at Phoenix's face...

A sweet-natured and melancholy film, beautifully directed, that manages to be satirical about love in a digital, distracted age without losing its heartfelt quality.

Singular, wryly funny, subtly profound consideration of our relationship to technology - and to each other.

For all its techno-focus, a very human love story about our need for connection. Strange, witty, honest and curiously comforting.

It’s a tale of lonely souls and literalized online dating, and you assume filmmaker Spike Jonze will characteristically mix high-concept absurdism with heartfelt notions. Unexpectedly, the latter dominates, thanks in no small part to Phoenix’s nuanced, open-book performance.

This is a movie you want to reach out and caress, about a man who, like everyone else around him in this near future, has retreated from other people into a machine world.

Phoenix is as sweet and soulful as we always suspected he might be.

Her is a 21st-century love story that perfectly captures the mood of the times and finds new inroads into the exhilaration and heartbreak that have existed since the first “I love you.”

This is a probing, inquisitive work of a very high order, although it goes a bit slack in the final third and concludes rather conventionally compared to much that has come before.

Jonze has made a sweet, smart, silly, serious film for our times, only set in the future.