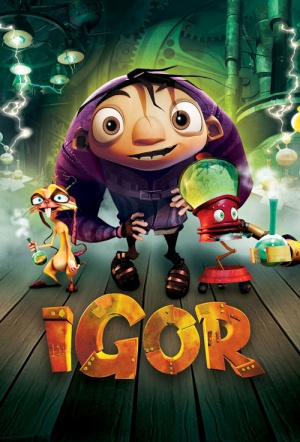 The stars are out for this gothic animated comedy – John Cusack, Steve Buscemi, Christian Slater and Eddie Izzard are all amongst the credits. Cusack voices the 'Igor' in question – a mad scientist's assistant who lives in the Kingdom of Malaria and harbours ideas above his lowly station – namely to take the first prize at the Evil Science Fair by creating a terrifying female creature of his own. His intentions cause consternation amongst the evil science community – especially ruffling the feathers of proper loony scientist Dr Schadenfreude (Izzard). But Igor's monster Eva (Molly Shannon) turns out to be less malevolent than he'd hoped.

Cribbing some of Tim Burton's fantasy imagery and laced with smart-mouthed comic lines from the pen of American Dad! scriptwriter Chris McKenna, expect a fast-paced and fun family movie.