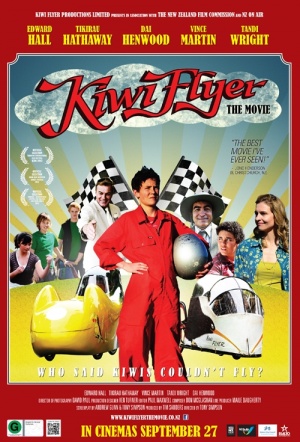 NZ family comedy about a young lad who sets out to win the Nelson Trolley Derby, in memory of his late father. Stars Dai Henwood, Tandi Wright (TVNZ's Nothing Trivial) and Vince Martin, the iconic face of Beaurepaires.

Figuring the best way to honour his dad is to win the coveted race, 12-year-old Ben has to overcome roadblocks on the path to glory including cheating Australians (led by Martin), dodgy loan sharks and a heartbroken mum (Wright) who doesn't want him to race at all.

Dai Henwood plays Ben's teacher, while the rest of the cast is made up of local Nelson talent. Producer Tim Sanders (Whale Rider) says the movie couldn't have been made "without the help of so many local organisations and individuals. From Nelson Intermediate, the Trolley Derby Club, the Hot Rod Club, Scouts and many others."

A feelgood family movie, which taps into the Kiwi DIY ethic - and, more importantly, a kid's need for speed.