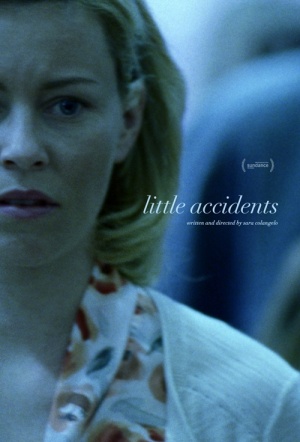 "Amos (Boyd Holbrook) is lucky to be alive, but he feels more cursed than blessed as the sole survivor of a devastating accident that took the lives of 10 of his fellow miners... Meanwhile, Amos' middle-class boss, Bill (Lucas), fears he will become an easy scapegoat for the mine's lax safety protocols. The anguish for Bill and his wife, Diana (Banks), increase exponentially when their teenage son goes missing without a trace. His schoolmate, Owen (Lofland), knows what happened to the missing teen, but also holds his tongue for fear of the consequences. The secrets and betrayals start to pile up, leading to a dramatic conclusion as these intertwined characters are forced to wrestle with the truth." (Seattle International Film Festival)

A sensitive and well-meaning but rather ordinary melodrama.

Owen tries with lurching uncertainty to ease back into normal, even as the writer and director Sara Colangelo clutters his path with enough obstacles to challenge the most heroically determined traveler.

This well-intentioned melodrama creates a number of potentially compelling figures, only to shove them into contrived corners that undermine the film's sense of authenticity.

To her credit, the writer-director tries for complexity. Now if she can just get the storytelling to match the quality of the filmmaking, I suspect there will be fewer little accidents.

A small-town tragedy leads to moral crises on all sides in Sara Colangelo's Little Accidents, a sober drama that makes class central to the story without ever sounding like it has an agenda.