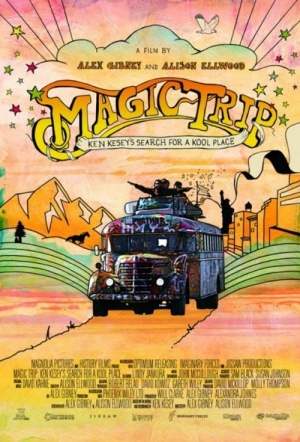 Following the success of his book One Flew Over The Cuckoo's Nest author Ken Kesey bought a bus, assembled a "merry band of pranksters" and went road tripping across America with the idea of making a film.

However the bus wasn't the only thing tripping and although they shot reels of film Kesey's film never materialised. This doco, compiled by Oscar winning modern documentary great Alex Gibney (Enron: The Smartest Guys In The Room, Taxi to the Dark Side), sees the realisation of Kesey's original vision and documents the beginnings of the 60s LSD influenced counter culture.

Fans of the subject matter, especially students of the Beat era, will find this revisionist reconstruction indispensible; others will share the same tedium claimed by some of the principals on the bus.

It places the viewer right in the middle of these counter-cultural hijinks, but is less lucid about the legacy of the Pranksters’ psychedelic adventures.

The cinematic equivalent of a yellowed scrapbook whose pictures are accompanied by sketchy captions created after the fact.

A hilarious, instructive and invaluable time capsule of that touching, idealistic and more than slightly ridiculous period.

The prehistory of psychedelia gets an interesting, if minor footnote with this documentary co-directed by Alex Gibney - who made Enron: The Smartest Guys in the Room.

Gibney and Ellwood struggle to create context for or make much sense of the vibrant hodge-podge of material that they excavated from the archives of Kesey, who died in 2001.

Regularly fascinating, but often somewhat inaccessible in its lack of historical context for the uninitiated.

The backstory behind the film is as compelling as the events it depicts.

Not the razor-sharp narrative that Gibney's Enron doc offered, but then you'd hardly expect that with a beatnik cast and enough acid to turn blue litmus paper to therapy.

Magic Trip is about as fun as being the only sober person at a party.