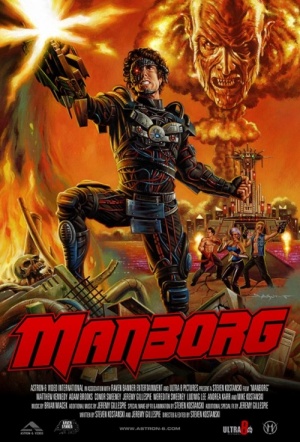 Modern-day throwback to post-apocalyptic sci-fi action flicks of yore, set in a dystopian Earth where armies of Hell rule supreme - lead by the villainous Count Draculon. Humanity’s last hope lies in Manborg: half man, half machine, all hero.

Once a young soldier killed during the first war against Hell, Manborg reawakens in the future, rebuilt as a walking weapon and mankind's last hope. Struggling to learn the secret of his origins, Manborg unwittingly befriends a post-apocalyptic Australian punker, a knife wielding vixen, and a kung-fu master before finally squaring off against Count Draculon in a desperate and bloody bid to take back the Earth.