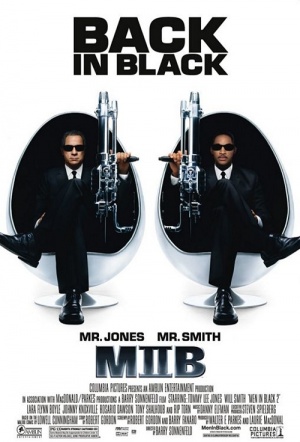 Will Smith, Tommy Lee Jones and director Barry Sonnenfeld return in the MiB sequel, where an alien threat looms large enough to bring Agent K out of retirement.

While J (Smith) has become a high-ranking agency man, K (Jones) has had his memory wiped and now lives life as a humble postman. When dangerous, shape shifting extra-terrestrial Serleena (Lara Flynn Boyle) threatens Earth and takes control of the MiB offices, J brings K back into the fold. Alongside a ragtag gang of friendly aliens, the pair set out to take down Serleena and restore order to the universe.

Elaborate, sporadically amusing but awfully lightweight followup, which has close to the same tone as its predecessor but makes one realize that freshness had a lot to do with its impact.

A near carbon copy of the '97 sleeper smash, but lacking much of the wit, invention or sparkle. Still better than 50 per cent of the blockbusters from the last three years.

As fizzy as the first, but not quite as refreshing. The pleasurable, eye-popping sense of surprise has diminished, and the teasingly referential attitude shows signs of fatigue.

A disappointment. A good-faith attempt has been made to duplicate the original elements, but the mix is wrong, bearings have been lost, the balance is off. It was attitude that made "Men in Black" special, a particular kind of cool insouciance that has proved as impossible to duplicate as it was irresistible to experience.

Strange, zany, generally amusing and very likeable without actually being all that hilarious or surprising, Men In Black II relies heavily on familiarity with and affection for the original. For fans of that film, who are simply content with more of the same,

None of it sticks, but with the door left open for a third Men In Black movie, the one advantage of forgetting everything is not knowing exactly what's coming two summers from now.