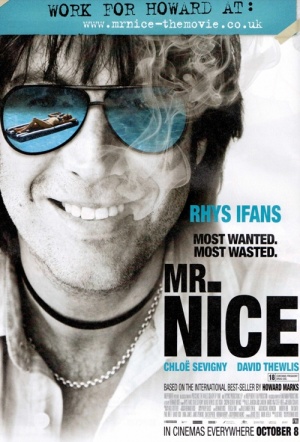 "Howard Marks (Ifans) was a young Welshman studying at Oxford when he discovered there was something unusual about his dorm room – it had a secret passageway that led to a storage space used by one of the school's top marijuana dealers. Marks and the dealer struck up a friendship as he became an enthusiastic customer, and a few years later, when plans to bring a large cache of hashish into England via Germany went haywire, Marks stepped in to help and was introduced to a circle of big league marijuana traffickers." (Official Synopsis)

A faithful, fun but flawed adaptation of a shaggy-haired, shaggydog story. Marks could have had it all, but he let his life go up in smoke instead. Why? Haven’t the foggiest.

An affable throwback to those guilt-free days when hippie drug dealers radiated the glamorous aura of avant-garde heroes risking prison to spread the doctrine of liberation through cannabis.

A solid, often entertaining life-of-crimer which benefits from some stylistic touches and a faithful, convincing central performance.

The result is a film that's long and choppy, with little narrative momentum. And yet at times, Mr. Nice is frustratingly close to brilliant.