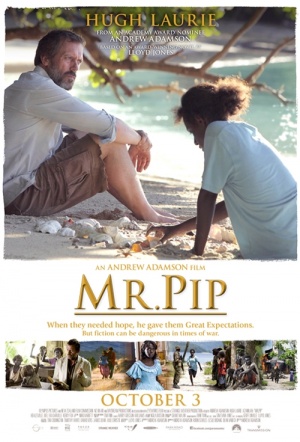 Shattered by the war over copper mining, Bougainville's teachers have fled. But the eccentric Mr. Watts (Laurie) has remained, the object of much curiosity and scorn who sweeps out the ruined schoolhouse and begins to read Dickens’ classic to the students. 14-year-old Matilda (Xzannjah), is transported into the Victorian world, finding inspiration in it while her everyday life is filled with harsh uncertainty as the realities of the civil war come to her village.

Kiwi director Andrew Adamson has a gift for the fantastical, what with the huge success of the Shrek and Narnia films. With Mr. Pip, he shows sensitivity for epic, emotional drama too. Faithfully adapting the moving Lloyd Jones award-winning novel Mister Pip, this is a fairly earnest retelling of one girl’s life-changing encounter with a mysterious teacher, who reads Charles Dickens’ Great Expectations to her otherwise educationally barren classroom in late-80s, war-torn Bougainville.

I love films that surprise me and this heartfelt and unexpectedly powerful film that uses Great Expectations as a catalyst for inspiration, certainly does that.

Adamson mixes magical realism with hard-hitting historical drama in a way that feels both contrived and questionable, even if the filmmakers clearly have their hearts in the right place.

Clip: We All Need a Change Sometimes