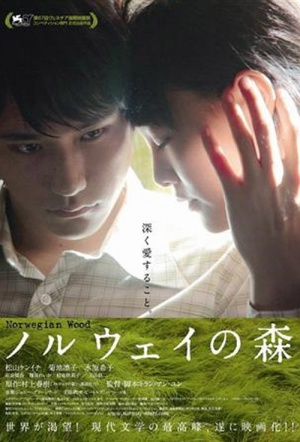 Nominated for the Golden Lion at Venice Film Festival, 1960s-set Japanese romance based on the Haruki Murakami novel.

"In the late 60s (most strongly evoked by the sharp fashion sense of the leads) Tokyo universities are rife with political unrest, but Watanabe (Kenichi Matsuyama) is consumed by inner turmoil. He is falling in love with the fragile, painfully inhibited Naoko (Rinko Kikuchi) and becoming increasingly fixated on her devotion to honouring a dead boy they both loved. The morbid power of their bond is tested by his much worldlier roommate Nagasawa and the mocking flirtation of the uninhibited Midori, who clearly fancies him but won’t play second fiddle to a ghost." (Source: NZ International Film Festival 2011)

The film looks gorgeous, but that hardly makes up for the atmosphere of resigned glumness.

It’s an unhurried and precise film, but approach it on these terms and you’ll find a sensitive, profoundly perceptive and life-affirming study of what it means to develop a bond with someone else.

It rewards attention with a very sensual experience.

Visually, this is a stunning film. It has a gentle tenderness that is pitch perfect and a sense of colour and texture you can almost feel.

Not all will have the patience to let themselves be caught up in more than two hours of teenage love and sex, however gorgeous the cast.

Murakami's 'unadaptability' for the screen is self-evident to fans of his books, but this is a noble if bleak first stab.