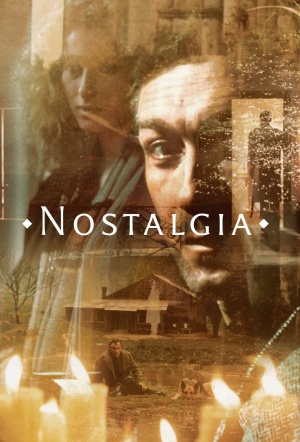 Russian poet Andrei Gorchakov, accompanied by a guide and translator Eugenia, travels through Italy researching the life of an 18th-century Russian composer. Winner of three major awards at Cannes 1983, including Best Director.

In an ancient spa town, Gorchakov meets the lunatic Domenico, who years earlier had imprisoned his own family in his house to save them from the evils of the world. Seeing some honesty in Domenico's act, Andrei becomes drawn to him. In a series of dreams, the poet's nostalgia for his homeland, his ambivalent feelings for Italy and his sense of kinship with Domenico become intertwined.

Looking to capture poetry through filmic style, Tarkovsky challenges the very notion of what film can be. Free of a strict plot, it is a narrative of experiences, seeking to express memories and feelings that haunt the human spirit.

Architecture is a vital part of Tarkovsky’s approach, with the decay and neglect of homes and Gothic ruins throughout the barren Italian landscape providing some of the most memorable visual moments in the film. Nostalghia evokes the spirituality and physiology that is manifested within dwellings and explores the role that memory plays within human culture.