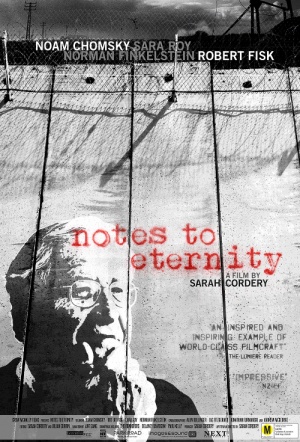 "In a world where political debate often resembles a shouting match, it is disconcerting to encounter a thoroughly political film that credibly assumes the voice of reason. Cordery’s long-gestated consideration of the Israel–Palestine conflict draws its steady tone from three key commentators whose views have been shaped to various degrees by their own personal histories. All three are Jews who grew up immersed in Jewish culture. Now Chomsky, Finkelstein and Roy are amongst the most eloquent of the disaffected, calling for justice for the Palestinian people. The film's fourth major participant is another renowned critic of Israel, journalist Robert Fisk, who brings the more febrile voice of frontline testimony to the film’s careful accumulation of historical perspective." (New Zealand International Film Festival)