NT Live: Of Mice and Men 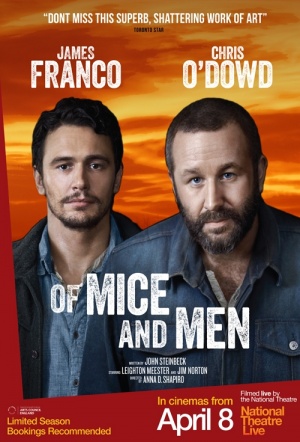 From the National Theatre's 2014 season of live HD recordings direct from the stage, this is John Steinbeck's classic tale featuring praised performances by James Franco and Chris O'Dowd. The New York production is the first Broadway play to be presented by National Theatre.

Shapiro’s handsome, meticulously designed production feels about as fluid as a diorama in a history museum. And its two undeniably talented leading men, though known as quirky and adventurous screen stars, here wear their archetypes like armor.

Franco is a welcome illustration of what can happen when a star sheds his other personas and takes to the stage to simply act.