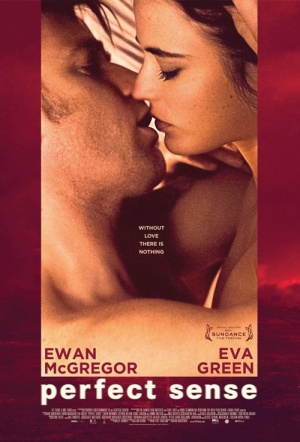 Apocalyptic romance thriller about a chef and a scientist who fall in love right as a worldwide epidemic begins to rob people of their sensory perceptions. Stars Ewan McGregor and Eva Green.

"When Susan (Green), an epidemiologist, reemerges from an affair gone sour, she encounters a peculiar patient—a Glasgow truck driver who experienced a sudden, uncontrollable crying fit. Now he is calm, but he has lost his sense of smell. Susan learns that 100 similar cases have appeared in Britain, with additional ones reported in France, Belgium, Italy, and Spain, and they all appeared in the last 24 hours. Although Susan’s encounter with Michael (McGregor), a local restaurant chef, holds the promise of new love, the world is about to change dramatically. People across the globe begin to suffer strange symptoms, affecting the emotions, then the senses." (Sundance Film Festival 2011)

For every risible scene, there’s one that will make you goggle, gasp or blub like a tiny baby.

The love story doesn't quite work. Mr. McGregor and Ms. Green make an attractive couple. But the movie's notion of two self-centered people ill suited to each other, shedding their defenses and clinging together, feels forced and sentimental.

A very complex and intelligent story hybrid that, must have looked great on paper and sounded impressive in discussion, but as a movie, it splatters all over the screen in unsatisfying genetic mutations.

The perseverance of McGregor's restaurant, in spite of its apparent inutility in the changing world, ends up having more poignancy than his parting and reuniting with the glowering Green.