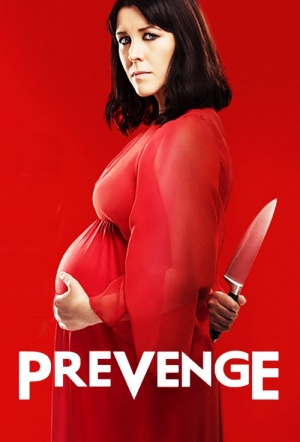 Alice Lowe writes, directs and stars in this twisted black comedy about a pregnant woman whose unborn baby is guiding her on a killing spree.

"Ruth (Lowe) is seven months pregnant, and like many expecting mothers she believes that her baby is speaking to her through an inner voice — the only difference being that this particular tot is telling her to go on a killing spree. Still mourning the death of her husband just months before, Ruth allows her baby to coach her on murder techniques and push her onward in a quest to dispatch people who stand in her way, from a pet shop owner to a DJ to a lonely businesswoman. Through all the carnage, Ruth's bulging belly serves as a perfect alibi — after all, who would ever suspect a cold-blooded killer could be lurking behind the sweet, glowing visage of a visibly pregnant woman?" (Toronto International Film Festival)

While not every tonal downshift here is entirely fluid, this remains a smart, risky one-off, unconcerned with those (and there will be many) who can't acquire its taste.

Horror's maternity ward births a treat. The story's sketchy, but satire's alive and the ending's a scream.

You don't need to have a warped sense of humour to enjoy writer-director Alice Lowe's gruesome black comedy, but it helps.

Lowe might want to evolve away from violent dark comedy in future projects. But this one is gruesomely successful.

At times, Prevenge feels like a woman's waking nightmare about pregnancy experienced as a loss of control over her own body - a Rosemary's Baby filtered though Lowe's edgy Brit-com sensibility.

A genuinely grotesque and original idea that never panders to genre expectation.

Alice Lowe's directorial debut may falter in its grip, especially in story and tone, but it's a daringly evocative film that marks a filmmaker of imagination and promise.