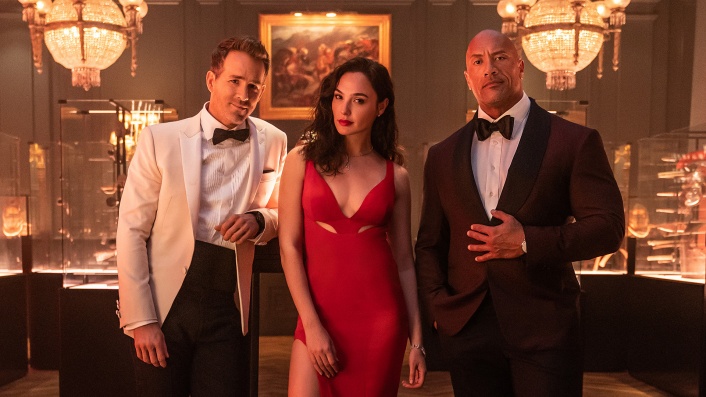 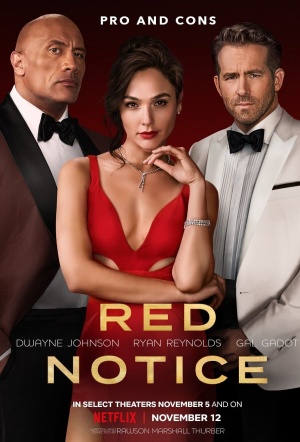 Dwayne Johnson, Gal Gadot and Ryan Reynolds lead this crime-comedy centred on a high-stakes art heist that brings together an FBI agent and two rival criminals. From the writer-director of Skyscraper and Dodgeball.

When an Interpol-issued Red Notice—the highest level warrant to hunt and capture the world’s most wanted—goes out, the FBI’s top profiler John Hartley (Johnson) is on the case. His global pursuit finds him smack dab in the middle of a daring heist where he’s forced to partner with the world’s greatest art thief Nolan Booth (Reynolds) in order to catch the world’s most wanted art thief, “The Bishop” (Gadot). The high-flying adventure that ensues takes the trio around the world, across the dance floor, trapped in a secluded prison, into the jungle and, worst of all for them, constantly into each other’s company.

The film is a lifeless pastiche of various blockbuster action-movie styles from the past four decades.

It almost plays like a pastiche of a Hollywood blockbuster, like a bot consumed the last 20 years of studio fare and spat out a facsimile as an experiment.

It has a certain clomping, smart-alecky entertainment value...

A lot of fun, if often in spite of itself.

Works surprisingly well for what it is.

There are certain things that money can't buy. As it turns out, an infectious sense of fun is one of them.

So much money, so much charm, so much movie, and yet it adds up to so very little.

Feels less like a caper than a live-action cartoon...

Merely an expensive brandishing of star power - only the stars haven't got it in them.

When the story winks at Raiders of the Lost Ark, the effect is to remind you of other, older spectaculars made in better faith.

There's something incredibly deflating about all of this...

To describe Red Notice as a whole lot of nothing could be understood as praise, up to a point.