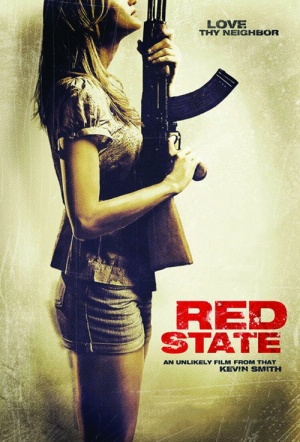 Never one to shy away from stirring up controversy, Smith leaves behind his comedy roots to tell the tale of three sexually-charged high schoolers who come across an online personal ad from an older woman looking for a gang bang and hit the road to satisfy their carnal urges. However, their fantasy turns sinister when Christian extremists with a fatal agenda, led by the twisted preacher Abin Cooper (Michael Parks, Kill Bill), hold them captive in a compound known as the Five Point Church.

This sloppily constructed horror-thriller lacks the satirical bite and action chops to skewer extreme-right-wing zealots with the gusto Smith clearly feels they deserve, instead evincing the verbal incontinence and slack tension that have long dogged the writer-director's work.

A brave attempt from Smith to break away from dialogue-heavy comedy, Red State doesn’t lack for ideas. What it does lack is an ability to execute them sharply.

For all its boisterous profanity and splattery violence, the film is more of a weary sigh than a sputtering volley of indignation.

Red State is cleverly contrarian enough to get a rise out of almost any audience.

This is one of those movies that's "interesting" rather than ˜"good". Smith has so much solid material to deliver that it's a shame the package is so sloppily wrapped.

Red State is gloriously unencumbered by fidelity to genre conventions, which lends it a thrilling element of unpredictability even when the action frequently grows shrill and heavy-handed.