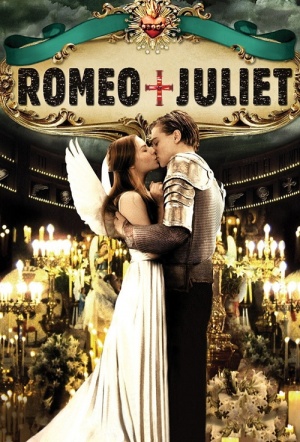 While Luhrmann and scriptwriter Craig Pearce retain Shakespearean dialogue, the warring families become mafia empires and swords are replaced with guns (with brand names "Dagger" and "Sword" to preserve the play's language).

"Two households, both alike in dignity. In Fair Verona where we lay our scene. From ancient grudge break to new mutiny. Where civil blood makes civil hands unclean. From forth the fatal loins of these two foes, a pair of star-crossed lovers take their life."

No doubt the most aggressively modern, assertively trendy adaptations of Shakespeare ever filmed.

One of the liveliest Shakespeare adaps of the past 20 years

Baz Luhrmann's gleefully cinematic version of the play is so relentlessly inventive and innovative, it takes 20 minutes to get a grasp on how appropriate is his approach to the material.

I have never seen anything remotely approaching the mess that the new punk version of Romeo & Juliet makes of Shakespeare's tragedy.

Shakespeare's name fills up the title, but this is clearly Luhrmann's vision and it's a genuinely inventive one.