GO AND WATCH THIS MOVIE!

Fact is always stranger than fiction, so if you didn’t know this movie was based on a true story, you wouldn’t believe it. That two women, one (Rachel), a white middle-class Auckland single mother of two, and one (Nikki), a Samoan-Kiwi filmmaker, should fall in love in this day and age, sounds fairly improbable but of course not impossible. Cupid strikes in the most unexpected places, be it on a Marae or in a Ponsonby restaurant, and the unfolding emotional roller coaster with all its comedic effects is a delight to watch on the big screen. Rachel, played by Robyn Paterson, is a commanding presence with an amazingly wide repertoire when it comes to emotional expression, while Nikki’s character (played by Hannah Martin) is more understated as the cool but mesmerising chick that plays hard to get but relents graciously in the end. The cast supporting the two main protagonists serve mainly as comedy elements, what with the cute two little children taking it all on the chin with good humour. While the cinematography is conventional, there is a clever innovation in blending in text messages that go back and forth between various characters, the children included, providing that quintessential ingredient of the modern lifestyle, being wedded to one’s smart phone. The sound track is pleasant, not intruding when the drama heats up on various occasions. Life in Auckland in 2019 seems fairly pleasant too, switching between the city suburbs and the green and clean West-Auckland and Waiheke beaches, so the scenery blends in with the main theme of some lovely people having a go at a happy ending. One only wishes life could be that fulfilling for the lesser souls that inhabit Auckland and Aotearoa in general, that Samoans and Pakeha and the whole melting pot that is Auckland could get it together like Rachel and Nikki, for truly, let’s make love – not war! 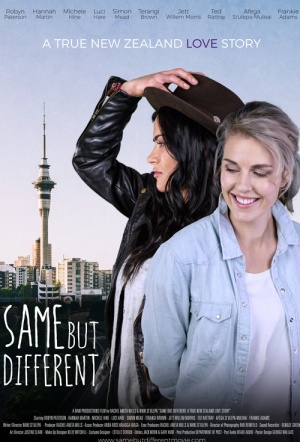