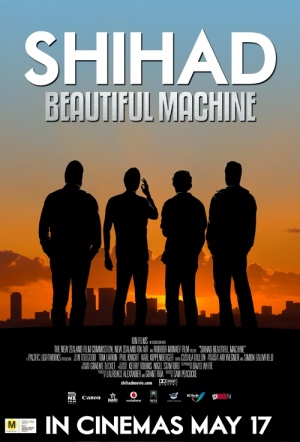 Documentary on legendary Kiwi group Shihad, chronicling their two-decade rise to greatness. From their roots in Wellington's '90s punk metal scene, Shihad's rock dreams faced wild days in Berlin, the tragic overdose of their manager, the international explosion of their The General Electric album and the infamous American name-change. This "all-access pass" doco charts the journey, and the bands fight with fame, the industry and finally – itself.

This is the feature debut from Sam Peacocke, who made the award-winning short film Manurewa and has directed a handful of Shihad's music videos.

An impressively thorough and entertaining examination of the life (thus far) of one of New Zealand’s most popular bands, Shihad: Beautiful Machine may nevertheless have limited appeal for anyone not interested in Shihad to begin with.

It's the best music documentary that will ever come out of New Zealand.

What comes through in Beautiful Machine is Shihad's passion for the band, and, well, the occasional bit of brutal back-stabbing. But most of all, it is up front and honest.