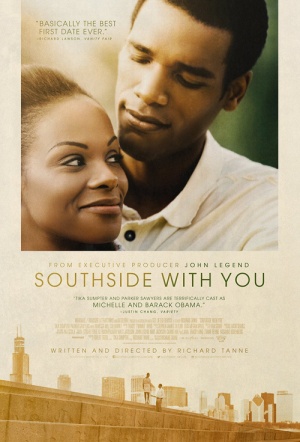 "One Chicago afternoon in 1989, a Harvard Law summer associate named Barack Obama finagled a tête-à-tête with an attorney from the prestigious corporate law firm where they both worked. Her name was Michelle Robinson, and his pretense was a friendly outing to a community organizer meeting. In Michelle’s eyes, it was most certainly not a date. But as ice cream gives way to a stop at the Art Institute, and the community gathering conveniently becomes a chance for Barack to lecture brilliantly on activism, it’s stunningly obvious to Michelle that this cigarette-smoking smooth talker is desperately trying to woo her.

"As their epic encounter continues into evening and these fiercely bright minds go head-to-head, sparks fly. Southside With You takes plenty of poetic license to craft this charming, playful story out of true-life events, yet actors Tika Sumpter and Parker Sawyers embody the essence of two people matched in power, idealism, and intellect." (Sundance Film Festival)

Southside With You / Reviews

Richard Tanne's writing-directing debut deepens into a pointed, flowing conversation about the many challenges (and varieties) of African-American identity...

First-time filmmaker Richard Tanne conjures an effective sense of time and place -- Chicago, 1989 -- and the leads are a real find, radiating authority, charm and chemistry.

Even if you didn't know what comes next, this story of the first days of the Obamas would still seduce as a sweet, smart romance.