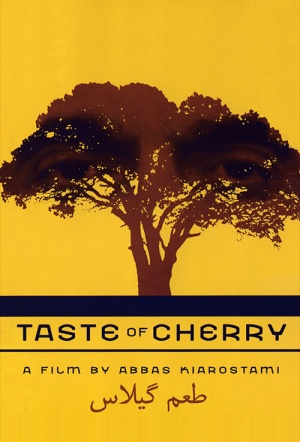 Minimalist drama by Iranian auteur Abbas Kiarostami about a rational man on the brink of suicide. Winner of the 1997 Cannes Palme d'Or.

"The masterstroke of Kiarostami's Palme d'Or winner is its refusal to provide any backstory or apparent motive for its central character. All we ever know about Mr Badii (Homayon Ershadi) is that he appears to be wealthy and sane as he drives through the outskirts of Tehran in search of someone willing to bury him after his planned suicide. Candidates come and go: a Kurdish soldier, an Afghani seminary student, and finally an old Turkish man who agrees before attempting to talk Badii out of it. The longer Badii travels and talks to these strangers the deeper Kiarostami draws us into profound contemplations of life, death and the meaning of free will." (Sydney Film Festival)

Kiarastomi, like no other filmmaker, has a vision of human scale that is simultaneously epic and precisely minuscule.

The film is such a lifeless drone that we experience it only as a movie.